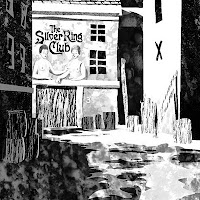 Page One: The Alley Containing The Silver Ring Club

Hardcore fans of Gerry Anderson's 1967 puppet series Captain Scarlet might just recognize this as the alley that features in the show's title sequence. It's the first shot in each show, where the camera tracks down the alley to Ed Bishop's honeyed tones ("The Mysterons - swworrn enemies of Earth!") just before someone steps on a cat and the camera whip-pans round to show the good captain himself getting machine-gunned to no ill effect. 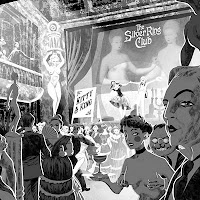 Page One: The Silver Ring Club

The interior of the club contains various tips of the hat to Andrew Davies' violently-throbbing 2002 television series Tipping the Velvet*, in particular, the names of the performers Kitty and King.

*Tipping the Velvet is an adaptation of the novel by Sarah Waters, but I've only seen the TV series.

Page One: Kitty and King

Ian's script describes this panel as follows: "Kitty is swooning in King’s arm and he’s using the cane he’s holding in his other hand to lift Kitty’s skirts to get a glimpse on her front bottom."
Although Simon B. Davies had successfully slipped a huge purple willy (ooh, missus) into the last episode of Stone Island back in 2008, I thought it best to check with Tharg-in-Residence Matt Smith as to whether Furry Front Bottoms would be acceptable (see pencil image, right) - word came back that 2000AD really wasn't That Kind of Comic so I fitted Kitty out with a pair of bloomers with a picture of a pussy on them (oo-err vicar). 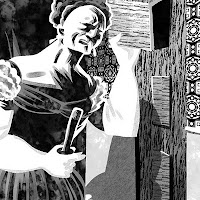 Stickleback's use of the German word "Rache" ("revenge") is a reference to the Sherlock Holmes story A Study in Scarlet (which Ian has been busy adapting as a graphic novel with our good mate Ian Culbard.)
I believe the reference to Holmes may hint at a possible origin for Stickleback... perhaps more will be revealed in time.

Incidentally, Stickleback must mis-pronounce the word, since the door(wo)man hears it with a long "a" and an English "ch"as in "Rachael," but in fact it has a short "a" and the guttural "ch" of "loch" - to an untutored ear it would sound more like "racker." 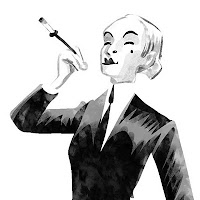 Named (in a fashion) after Ronnie and Reggie, the infamous Kray twins who ruled London's underworld during the 1960's. Ronnie Kray was rumoured to have had sexual relationships with both Labour MP Tom Driberg and Conservative Lord Boothby, which may have led to a lack of political will in stamping out their criminal activities.

Our Ronnie is based on the famous image of a young Marlene Dietrich in a tuxedo. 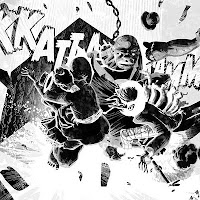 The composition and lighting in the panel are a bit of a tip of the hat to veteran comic artist Gene Colan (whom I remember fondly for his runs on Marvel Comics' Daredevil, Iron Man, Captain Marvel and Howard The Duck). 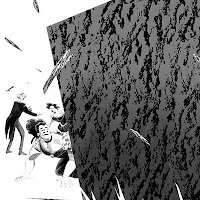 When I was drawing this panel, I couldn't help but think of the puzzled ape-men regarding the alien monolith in Stanley Kubrick's trippy 1968 tour-de-force 2001: A Space Odyssey (even if the proportions of the block are wrong). 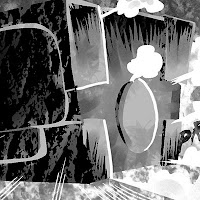 Naturally enough, a reference to 80's-toys-become-2000's-movie-stars Transformers. What it folds out into, you'll see next episode.
Posted by Unknown at 9:56 pm

Apologies to M D Penman and Jim Campbell, I accidentally erased your posts instead of approving them!

Luckily, knowing I'm a fat-fingered freak, I kept a copy of the text, as follows:

"Gorgeous work as usual. Stickleback is one of my favourite comics of yours.

"I have nothing intelligent to add, but I just wanted to let you know that I'm thoroughly enjoying this series, as much as I have all your other entries in the Edgiverse.

Do I lose geek points for only having picked up one reference (Grouty) in three episodes?

M D - many thanks, hope you enjoy the rest of it!

Jim - not at all, in fact I have to go back and look up half the references when I'm doing these blog posts (not to mention, "I happened to be thinking about 2001 while I was drawing that panel" is not exactly spot-able ;-)

Loved the Gene Colan influenced panel though I had no idea of the source, fascinating stuff as ever.