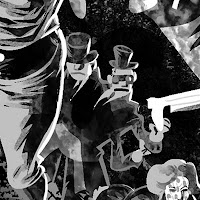 In my previous post I described how I'd forgotten to include Peepers and Lug with the rest of the gang - this episode they suddenly appear in the pit with everyone else. But what Tharg doesn't notice won't hurt him. 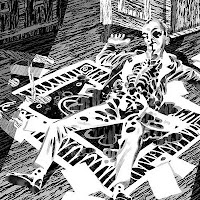 Is named after the character played by veteran British actor Michael Gough in Tim Burton's 1999 film Sleepy Hollow. Ian asked me to make the character look like Michael Gough, but I'm not very good at likenesses, and luckily the demands of page layout meant the panel he appeared in was so small you couldn't make out his face anyway. 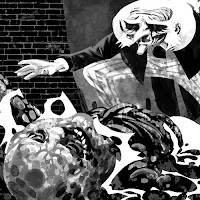 Mr. Tickle's Christian name is a nod to Roger Hargreaves, creator of the Mister Men and Little Miss books. 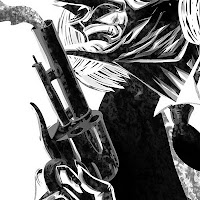 This unlikely-looking weapon is a LeMat revolver, an American Civil War side-arm that features a standard .42 or .36 revolver mechanism with a secondary 16 gauge barrel capable of firing buckshot (in other words, it's a big pistol with a small shotgun built into it). 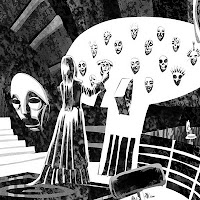 Since we wanted it to look futuristic (for the 19th century) the Countess's boudoir borrows from the design aesthetic of German Expressionist movies such as Fritz Lang's Metropolis.

The skull-shaped stand for her masks was inspired by the work of early 2000AD stalwart and League of Extraordinary Gentlemen artist Kev O'Neill. 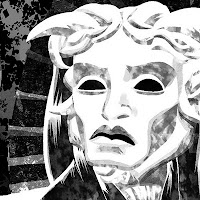 Surprisingly (since it appears more beautiful than monstrous) the Countess's mask here is based on the Medusa Rondanini, a famous marble sculpture of the Medusa's head. It is probably a Roman copy of a Greek work dating from the 5th Century BCE .
Posted by Unknown at 8:43 pm

Great stuff, where the other masks based on anything in particular? Some seem familiar.

The skull-shaped stand for her masks... and I foolishly thought i was a nod to THE PUNISHER!