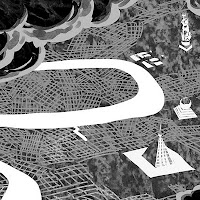 Page One: Stickleback's London
This view is accurate in terms of the locations of landmarks and the positioning of the river bends in perspective; however, at the altitude necessary to take in this sweeping view, the individual landmarks would be vanishingly small, so I bumped their sizes up by a factor of five or so to make them visible.
As well as real landmarks such as Hyde Park, Buckingham Palace, Trafalgare Square, The Houses of Parliament, The Tower of London and Tower Bridge, we included the following planned or imaginary buildings:
1) The London Eye - a giant Victorian Ferris wheel, placed, like its 21st Century counterpart, opposite the palace of Westminster.
2) The Crystal Palace - here still occupying its original site in Hyde Park.
3) William Thomas's proposed giant pyramidal cemetery - designed to hold up to five million dead Londoners!
4) The proposed mausoleum for Sir Isaac Newton (the smaller pyramid with the sphere on top). We used this building as the new Greenwich Observatory (where Spry's office was located) in Scarlet Traces, but here it's been moved off Greenwich hill, to make way for:
5) John Flaxman's 200-foot-high statue of Britannia, proposed circa 1800 but never built. 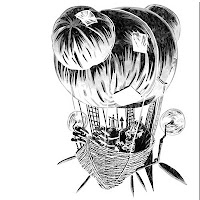 Page One: The Mimsie
Though balloons using actual boats as gondolas is a common steampunk trope, the design of the Mimsie is meant to echo certain characteristics of that fine four-fendered friend, Chitty-Chitty Bang-Bang, for reasons that will become apparent in the next item.
Personally, I couldn't help but think of Noah and Nelly. 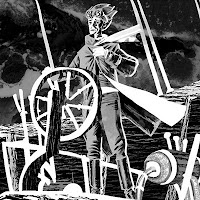 Page Two: Potts
Inspired by the inventor hero of Ian Fleming's 1964 novel (and subsequently 1968 film) Chitty-chitty Bang-bang. Our Potts has been having a hard time of it, and is indebted to Stickleback to boot.
Posted by Unknown at 8:50 pm