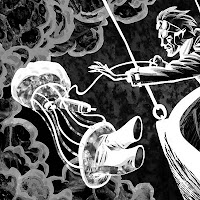 Page Two: Breeches Buoy
Potts's emergency device is based on an old piece of marine rescue kit called a breeches buoy. The device was essentially a pair of trousers stitched into a lifesaver, with ropes running up to a pulley. It was used to extract personnel from ships wrecked near shore by allowing them to be hauled over the water using a line fired from a short-barrelled cannon called a Lyle Gun. 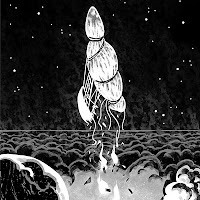 Page Three: The Mimsie Ascends
When I drew this I had in mind the magnificent night-time above-the-clouds scenes from Hiyao Myazaki's 1986 animated film Tenkû no shiro Rapyuta (Laputa the Flying Island/Castle in the Clouds). 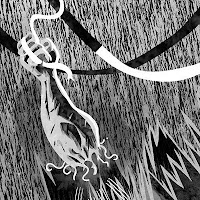 Page Four: Black Bob's Arms
I case you've forgotten, Black Bob's arms were both severed in combat with the false Buffalo Bill during the last episode of Stickleback: England's Glory, and we saw Miss Scarlet stitching them back on in the final page of that episode.
Posted by Unknown at 8:55 pm