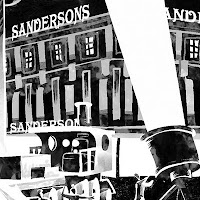 Page One: Sanderson's Department Store and The Burleigh Theatre
Both major landmarks of "Everytown," the fictional city seen bombed to ruins in an air raid in William Cameron Menzies' 1936 film Things To Come, which was based on H.G. Wells' 1933 novel The Shape Of Things To Come.
The air raid scene is compellingly realistic, which is all the more impressive because the first saturation bombing of civilians from the air did not occur until a year later in 1937, during the Spanish Civil War, when the Basque town of Guernica was bombed by the German Luftwaffe and Italian Fascist Aviazione Legionaria on behalf of the forces of Generalísimo Francisco Franco . 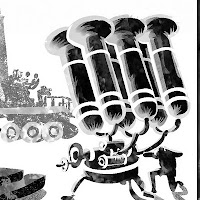 Page One: "War Tubas"
These strange-looking devices (which can also be seen attached to the telescope on page one of this episode) are based on now-obsolete but nevertheless real devices called acoustic detectors, essentially giant ear trumpets which were designed to give advance warning of hostile aircraft in the years before radar was invented. 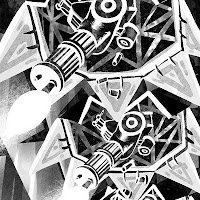 Page Three: Gatling Guns
Invented in 1861 by Dr. Richard J. Gatling, the Gatling Gun is probably the most famous precursor of the modern machine gun, and is instantly recognizable by its characteristic rotating cylindrical barrel.
The ones on the Mistral are very large scale, firing small-bore artillery shells instead of bullets.
Posted by Unknown at 9:00 pm

I wouldn't have though Stickleback could get any better, but the current run has exceeded the highst of expectations. Every panel is a delight, every episode a nail-biter. Can't wait to see how this wraps up!