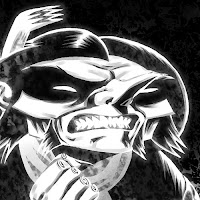 Stickleback has an arrangement with the White Lotus Empress that he can visit his son on one day each year - he’s lost five years to his regeneration, hence he feels he’s owed five days. 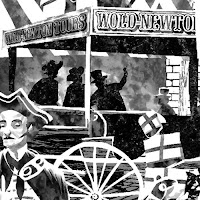 In the fictional biographies Tarzan Alive (1972) and Doc Savage: His Apocalyptic Life (1973), writer Philip José Farmer introduced the Wold-Newton family tree, a genealogy that bound together all of the best-known characters from the pulp and speculative fiction of the late 19th and early 20th Century. The idea was that the bunch of extraordinary individuals all sprang from common ancestors who were affected by radiation from a meteorite during a coach tour to the village of Wold Newton in Yorkshire. The notion of characters from one fictional world “crossing over” into another was not new - it had occurred in pulp fiction and was commonplace if the world of comics - but was usually limited to characters owned by a single publishing house. Farmer not only cast his net wide across the popular fiction of a whole era, but he worked out complex rationalisations to allow these sometimes-conflicting continuities to exist all in the same world. Farmer himself produced only a few novels depending on the Wold-Newton continuity, the most notable being his insanely pornographic “Doc Savage meets Tarzan” novel A Feast Unknown. In the UK, writer Kim Newman took up the baton with his novel Anno Dracula and its sequels, and in this century writer Alan Moore and artist Kev O’Neill brought the genre back to comics with the League of Extraodinary Gentlemen. Ian and I are manfully following in all these fine gentlemens’ footsteps. 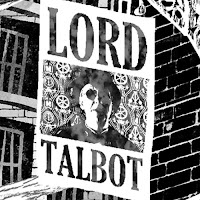 A tribute to writer/artist Bryan Talbot, whose The Adventures of Luther Arkwright (1980-84) lays claim to being the first British graphic novel, and also possibly the first example in comics of the genre that would become known as steampunk.
Bryan also drew the bulk of the first-ever steampunk story in 2000AD, Nemesis the Warlock Book IV: The Gothic Empire (1984, written by Pat Mills, first episode drawn by Kevin O'Neill.) 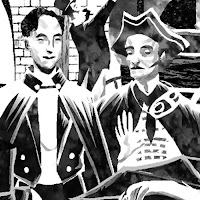 *Initially I was going to miss this one out, as for some reason I felt too scared to mention him. 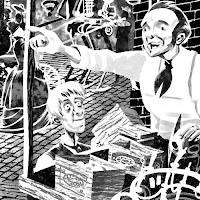 Run by the forebears of Del-boy and Rodney from the popular BBC TV sitcom Only Fools and Horses (1981-91). Items on the stall (including a chandelier and a Batman mask) refer to famous incidents from the series. 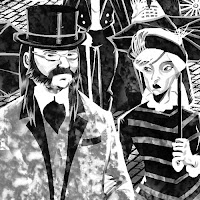 Writer Kim Newman, whose ingenious re-combinings of characters and setting from popular culture have provided inspiration for both Stickleback and Scarlet Traces, promenades with two of his most famous female characters. 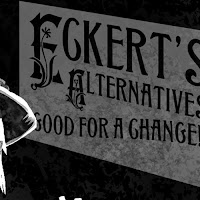 Over the years I've slipped in various references to odd or fictional comestibles into my strips; fishpaste is the obvious one, also Zopto-Bemsol ("Effulgent and Prim!") and Mongue ("You know it's wrong!"). Eckert's Alternatives ("Good for a change!") are Ian's contribution to this noble tradition, his first since Captain MacLean's Old Rot Gut made its debut in Leviathan ten years ago. 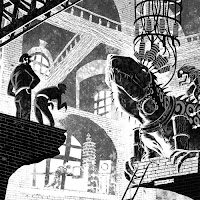 The underground vaults in which the Sorrys lurk are directly inspired by the Carceri d'invenzione ('Imaginary Prisons’) of artist Giovanni Battista Piranesi (1720-1778). This series of 16 prints, first published in 1750, consist of black & white etchings of vast, vaulted underground spaces, and have been claimed as an influence by both the Romantics and the Surrealists. Given how wonderful the Carceri are, it surprises me to note that I haven’t ripped them off more often ; the last time was when completing the final section of Scarlet Traces back in 2002.
Posted by Unknown at 5:14 pm

Your artwork is so good on Stickleback I am loth to make any criticism but Kate Reid wears spectacles. O-O

all this background info really adds to an already amazing series. thanks mr d sir.